American Board of Trial Advocates 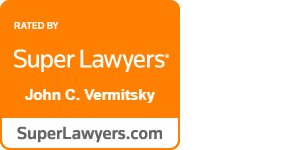 Education
Mr. Vermitsky received his undergraduate degree from the University of Rochester located in Rochester, NY where he graduated with honors with a dual degree in Spanish Language and Culture and Political Science. While he was enrolled at the University of Rochester, Mr. Vermitsky received the distinction of Academic All American for his national success in intercollegiate debate.

Mr. Vermitsky is also a North Carolina board certified specialist in Family Law and handles all elements of domestic litigation from custody to alimony, to property division and everything in between. Additionally, Mr. Vermitsky has had considerable experience representing spouses who are involved with claims of alienation of affections and criminal conversation and has persuaded at least one trial court to find these torts unconstitutional.

Mr. Vermitsky is AV rated and is a member of the ABOTA (American Board of Trial Associates). Additionally, Mr. John C. Vermitsky is fluent in Spanish, allowing him to assist a broader range of clients.

More About Mr. Vermitsky
As a proud Demon Deacon, Mr. Vermitsky teaches trial practice at Wake Forest School of Law and is clinic supervisor in the litigation clinic.
Originally from Budd Lake, New Jersey, Mr. Vermitsky and his family have called North Carolina their home for over a decade. His hobbies include teaching Karate, spending time with his wife and children, traveling and cheering on his favorite sports teams, the New York Jets and Demon Deacons.